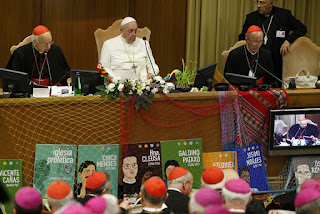 CORPUS, the National Association for an Inclusive Priesthood, applauds the recommendation to Pope Francis to consider restoring a married priesthood in the Catholic Church. This expanded and enriched sense of priesthood was the basis for CORPUS’ foundation back in 1974. Since then, over 35,000 priests in the United States have been dismissed from public ministry because of responding to their God-given call to marriage.

It has always been our position that a married priesthood is “good, right and holy” because:

·Marriage embodies and celebrates the gifts of sexuality and the sacramental intensity of intimacy.
·Marriage demands that we listen, not with the ear, but with the heart. It demands going beyond the
rhetoric of reason and discovering the true meaning of relationship.
·Marriage insists that we love ourselves as much as we cherish the other.
·Marriage moves beyond an inner circle forming a connection and community of family and friends.
·Marriage requires a sense of compromise, as well as consensus.
·Marriage develops a sensitivity to the needs of others, without judgement or prejudice.
·Marriage respects inclusivity, where all are valued.

These qualities would be valuable in a priesthood, not only for developing healthy communities of faith, but especially when dealing with critical life issues such as family planning, divorce, homosexuality, women’s equality, and church governance.

In the years following Jesus’ death and resurrection our gospels record that the early Christian communities were families who gathered to “remember, celebrate and believe”. There was no measure of marital status or gender.

A married priesthood would bring an incredible gift to our church. This matters not if priests are male or female, married or single, gay or straight. Priests are called by God to be servant leaders. It is good for our church. It’s time to do this not out of desperation but out of a sense of gospel inspiration.
Posted by Stu O'Brien at 10:40 PM