Jean Vanier & the Betrayal of Trust 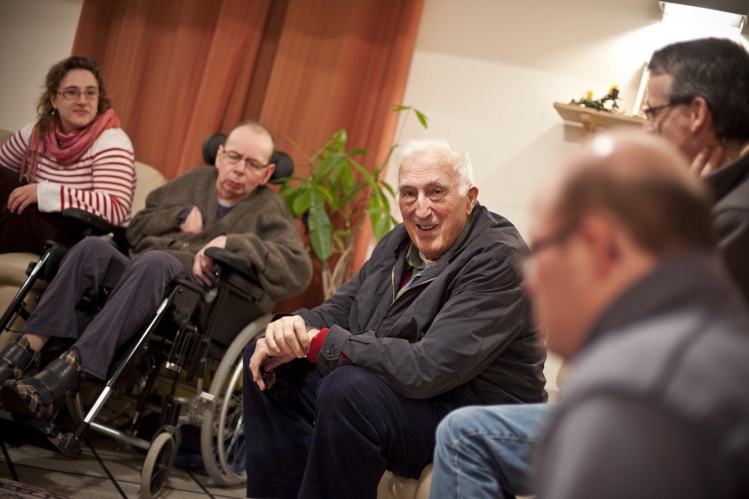 Jean Vanier, founder of the L'Arche communities, is pictured in a March 3, 2011, photo. (CNS photo/courtesy Jean Vanier Association)
People around the world are processing the news that the revered spiritual leader Jean Vanier [1] has been found to have sexually and emotionally abused multiple women who came to him for spiritual “accompaniment” over several decades. The revelations sparked a media storm inside and outside Catholicism. Celebrity abusers are front and center in our tremulous time: Bill Cosby, Harvey Weinstein, Jeffrey Epstein, to say nothing of the serial abusers who have haunted the studios of the BBC, the campsites of the Boy Scouts, and the curial cells of Vatican apparatchiks. But there is something even more disturbing about spiritual leaders, as they are the ones we most trust, the ones removed from the hurly-burly, the mad contradictions that define our flawed humanity. They are beacons in a darkening landscape. And now one light has been extinguished.

by Catholic News Service
Posted by Stu O'Brien at 6:47 AM No comments:

Editorial: The pope is NOT upset with Fr. James Martin

Editorial: The pope is NOT upset with Fr. James Martin

by NCR Editorial Staff
Posted by Stu O'Brien at 6:45 AM No comments:

Celestina Fernandes da Silva, a Catholic activist, waters flowers in front of her home in the Wapishana indigenous village of Tabalascada, Brazil, April 3, 2019. (CNS Photo/Paul Jeffrey)
Jesus spoke of the need for new wine in new wineskins for a reason: sometimes we don’t see and hear the new thing happening because we’re looking out for the old thing. Nowhere has that been truer than in the reception of Pope Francis’s latest apostolic exhortation, Querida Amazonia. As the dust begins to settle on the reaction to Pope Francis’s response to the Amazon synod, we have only begun to see what his move really consists of, and the future he is opening up: a truly global Catholicism in which lay people assume their responsibility for evangelization, and exercise real authority in a church that is embedded in local, not just Western, clerical culture.

The clerical sexual abuse scandal is threatening the very existence of the Catholic Church as an institution, according to Fr Hans Zollner, president of the Centre for Child Protection at the Gregorian.
Speaking at a theme day on “Escaping from Power, Seduction and Abuse” in Dresden, he said the revelation of countless cases of abuse by clergymen had hit the Church like an “earthquake”, had made the hierarchy and the Pope open to attack and rendered them powerless.
“The institution is threatened existentially but at the same time its coping capabilities are overtaxed,” he said. He had discerned a systemic inability to act, he said. Some churchmen were still trivialising and denying the abuse and the Church’s responsibility for it. In his eyes, the Church was traumatised, he said.

Column | Signs of the Times

by Thomas Reese, Religion News Service
In one of my earliest memories, my father is warning me about a famous man, "Remember, he still puts his pants on one leg at a time." I remembered this warning when I heard about the fall of another famous icon, Jean Vanier.

Before Lent, count your ordinary blessings

PARIS (FRANCE)
L'Arche International
February 22, 2020
[With links to report annd documents.]
https://www.larche.org/en/web/guest/news/-/asset_publisher/mQsRZspJMdBy/content/inquiry-statement-test?_101_INSTANCE_mQsRZspJMdBy_redirect=https%3A%2F%2Fwww.larche.org%2Fen%2Fnews%3Fp_p_id%3D101_INSTANCE_mQsRZspJMdBy%26p_p_lifecycle%3D0%26p_p_state%3Dnormal%26p_p_mode%3Dview%26p_p_col_id%3Dcolumn-1%26p_p_col_count%3D1
On February 22nd, 2020, the leaders of L’Arche International sent a letter to the Federation of L’Arche Communities, which operates in 38 countries worldwide, publishing the results of an inquiry that had commissioned from an independent organization. The inquiry included testimony implicating its founder, Jean Vanier, and his historical link to Father Thomas Philippe, who he thought of as his spiritual father.
The investigation was carried out by GCPS, an independent U.K. consultancy which specializes in improving procedures for the prevention and reporting of abuse. In addition, L'Arche International established an Independent Oversight Committee made up of two former senior civil servants in France, to assess the integrity and reliability of the inquiry’s process and findings. Following their review of the report they stated: “We have no reason to question the methodology of the inquiry and the seriousness with which it was carried out. We therefore consider these conclusions to be well founded.”
The inquiry received credible and consistent testimonies from six adult women without disabilities, covering the period from 1970 to 2005. The women each report that Jean Vanier initiated sexual relations with them, usually in the context of spiritual accompaniment. Although they had no prior knowledge of each other’s experiences, these women reported similar facts associated with highly unusual spiritual or mystical explanations used to justify these behaviors. The relationships were found to be manipulative and emotionally abusive, and had a significant negative impact on their personal lives and subsequent relationships. These actions are indicative of a deep psychological and spiritual hold Jean Vanier had on these women and confirm his own adoption of some of Father Thomas Philippe’s deviant theories and practices.
The inquiry made no suggestion that Jean Vanier had inappropriate relationships with people with intellectual disabilities.
Alongside the GCPS inquiry, L’Arche International commissioned a major piece of historical research based on previously unseen archives. Analysis of the various archives reveals the sources of Jean Vanier's attitude towards these women, and confirms that he adopted some of Father Thomas Philippe's deviant theories and practices.