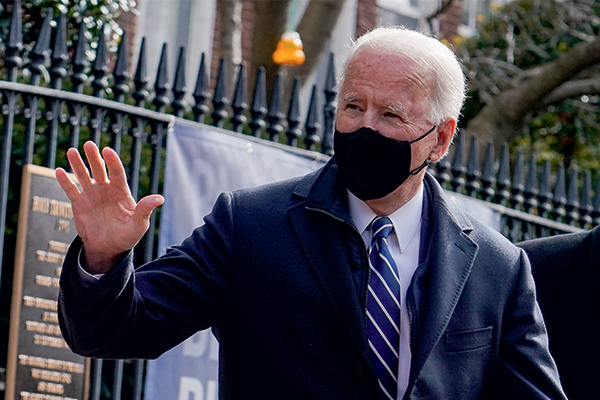 Can the bishops unite a Church that is increasingly addicted to its own polarisation, when they themselves are responsible for the bitter divisions between American Catholics? A US-based Italian theologian fears that the Biden presidency may accelerate the slide towards schism

The Catholic Church in the United States has been divided for some time now: a two-party political system has produced a two-party Church, with a solid majority of the bishops in favour of the Republican Party – even Donald Trump’s Republican Party. But now there is a risk of the US Church becoming even more divided – not one community with a variety of different cultures and spiritualities, sometimes in tension with each other, a “big tent”, but two distinct versions of Catholicism, each claiming orthodoxy and existing in a regime of mutual excommunication.

Thoughtful, conservative Christian writers and academics, longtime veterans of the “culture wars”, recognise that, on a political level, they have lost. They have concluded that the United States is no longer a Christian country – indeed, they see it as becoming increasingly hostile to traditional Christianity. But the Catholic “culture warriors” have not laid down their arms or resigned themselves to retreat.

The internal struggles of the Church and of the nation overlap. Trump lent his support to those who refuse to question the myth of the United States as a nation endowed with a special blessing, with a destiny inscribed in the divine plan. He received the support of many voters who oppose not only the Democratic Party but also any critical re-evaluation of this foundational American myth.

The American myth has religious and theological connotations that precede the discourse of churches and religions. Joe Biden’s speech on the night he accepted his nomination at the Democratic National Convention was dominated by the image of light opposing the darkness – the darkness of disorder and threat to the constitution that Trump and Trumpism had caused, but also the darkness of a real cosmological chaos that it didn’t cause but further revealed: a cosmological chaos that calls into question the moral and religious roots of America.

The rise of Barack Obama had two opposing effects. On the one hand, his election reassured liberals and progressives of the fundamental value and vitality of the American project at the end of the “American century”; on the other hand, his presidency triggered a reaction – fuelled by the anxieties of an endangered “white supremacy” – by political and religious conservatives against the new face of the country. The political phenomenon of Trump, with its insistence on the conspiracy theory that Obama was not really an American citizen, began alongside the Tea Party movement, which many tried to portray as an expression of simple anxiety for the economic future of the country struggling with the great recession that began in 2008, ignoring its obvious racist overtones.

Catholic “culture wars” prospered not only because of the rise and fall (due to its failure to deliver on pro-life issues) of the “new Deal coalition” between Democrats and Catholics, but also because those political-theological struggles revealed the stakes of the game. The current phase of the “culture wars” is not about economics but culture, in the sense Terry Eagleton described it: “Culture … can nowadays be defined as that which you’re prepared to kill or die for.” The “culture wars” have reached another stage in their unfolding as theological wars: they have divided Catholicism in a much deeper and more visible way than they have divided other churches, bringing the US Catholic Church close to a situation of soft schism. Taking a position in the “culture wars” has now become an unavoidable part of life for Catholics; not only where one stands on the spectrum between left and right in politics and in the Church, but even where one stands within each wing of the Church. Even in Catholic academia, ideological credentials and political positioning have become more important than other abilities or achievements.

Much more evidently on the right, but not entirely absent on the left, the Trump presidency and the 2020 election revealed the extent to which the two sides of the Catholic divide have adopted the platforms of the two political parties, bending theological orthodoxy to fit ideological orthodoxy and leaving very little room for dissent from specific positions on either side. There are two packages on offer, and, however reluctant they might be about some of the items in each, Catholics are pressed to adopt one or the other. This is evident, for example, in the difficulty Catholics have in articulating a non-partisan interpretation of the “Black Lives Matter” movement. To cultivate a distance from each side, to try to cherry pick parts from each, would risk leaving the Church in a cul-de-sac, not only politically but also morally and spiritually.

The challenge for the US Church, both political and ecclesial, in the present emergency is to rebuild a unity that marginalizes the extremes on both right and left – and to squash the burgeoning sectarianism that is the epitome of the non-Catholic spirit. This won’t be easy. The bishops lead a Church that is increasingly addicted to its own extreme polarisation – thanks in no small part to the heavily partisan leadership that they themselves have provided.

The front in the bishops’ conference most hostile to Biden’s administration – and simultaneously to the papacy of Francis – is no longer the old Catholic conservatism but a new Vendée that reacts to what it perceives as a political and social revolution in which the question of abortion has been joined by that of gender and sexual identities. What the Jesuit theologian Mark Massa has called the “American Catholic Revolution” of the Sixties was, it seems, followed by an insurrection, a Catholic counter-revolution; and the election of the second Catholic president represents a setback, not a solution.

One can speak of “Catholic Trumpism” as a phenomenon of cultural and symbolic reception within the Church of the moral example of a president who has, as never before in the history of US-Vatican relations, directly opposed the Pope, not on the basis of a secular agenda but of a religious, neo-Constantinian one. The result has been severe damage to the moral authority, cultural prestige and cohesive strength of Catholicism in the eyes of a nation already in the process of secularisation.

The intellectual life of conciliar, dialogue-seeking Catholicism in the United States, which Biden to a considerable extent reflects, is now, from the point of view of ecclesial strategy, in a no man’s land; the ideas of progressive Catholic social teaching are articulated today in largely post-theological, post-ecclesial, and post-Catholic language. This leaves a void in American Catholicism that is filled by neo-fundamentalism and neo-integralism in both politics and intellectual debate. It is a process that will continue even after Trump’s election defeat.

Trump and Trumpism have forced America to confront itself at a time of crisis that the coronavirus pandemic has only deepened. The Trump presidency, which the Republican Party almost wholly embraced, lifted the veil on the disastrous fruits of “anglobalisation”, the small-state laissez-faire economic doctrines of the Anglo-American mainstream since the Thatcher-Reagan years. This has been an unveiling of the failures not only of Trump’s hamfisted leadership, but of an entire intellectual and political generation, including the Clinton and Obama administrations and the Democratic establishment in which Joe Biden has been a central figure for nearly forty years.

We are in a political but also a theological crisis. The future of lived Catholicism, in the United States as in the rest of the world, will not necessarily have the look of a magnificent and progressive theological liberalism. In American politics and in the Democratic Party especially, the 78-year-old Biden is – to adopt the term used by former Italian prime minister Romano Prodi – one of the last of the “grown-up Catholics”: those twentieth-century Catholics who refused to allow their own “religious respect of the intellect and the will” for Church teaching (as Vatican II describes it) to prevail over the conscience of a politician who serves the common good of a multi-religious country, both believers and non-believers, and who distinguishes between the different roles of Church and state in society. There are now fewer Catholic Democrat politicians. Besides the dwindling number of boomer Catholics, this is due in part to the risks of incurring informal excommunication by Church authorities, but mostly it is because the party does not tolerate deviations from the party line on the abortion issue.

The Democratic Party in 2020 spoke, through Biden, with his obviously heartfelt piety, a language that was intelligible to many religious voters, including Catholics. On the other side of the aisle, Catholics infuriated by Biden’s unwillingness to bring his faith to bear on life issues, come largely from a tradition that ranges from a moderate neo-conservatism inspired by John Paul II and Benedict XVI to a more extreme neo-fundamentalism whose prophet is the German philosopher and conservative theorist Carl Schmitt. Today’s divided US Church is reminiscent of that of France between the late-nineteenth and mid-twentieth centuries. But – worryingly for those hoping to arrest the slide towards outright schism – among the new generation of American Catholic political thinkers and activists, there is much more of Maurras’ reactionary nationalism than of Maritain’s Catholic democracy.

Massimo Faggioli is professor of theology and religious studies at Villanova University. His most recent book is Joe Biden and Catholicism in the United States (Bayard).

Back to articles
Posted by Stu O'Brien at 11:34 AM