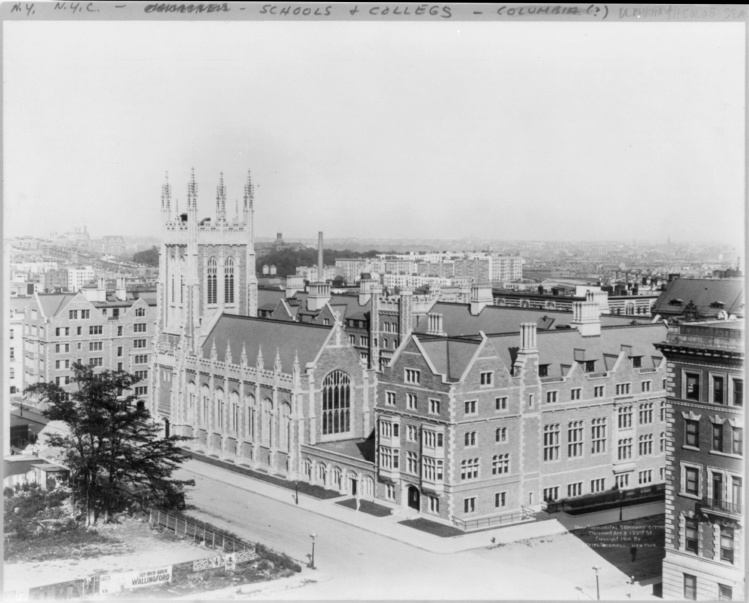 Union Theological Seminary, Claremont Ave. & 122nd St., New York City, in 1910 (Library of Congress Prints and Photographs Division)
“Controlling the narrative” has been a political watchword for a while now, as we are seeing again in the age of the permanent election. It’s been a watchword for writing and understanding church history for a lot longer than that, going all the way back to Eusebius of Caesarea (d. 339), early Christian biblical scholar, apologist, panegyrist and biographer of Constantine, and author of the first book to bear the title Ecclesiastical History. In that work, Eusebius created a triumphalist narrative of the victory of an original and unchanging orthodox Christianity passed on through the bishops as the successors of the apostles. It dominated Christian historical self-understanding for almost a millennium and a half, though the Western Christian version had to expand the narrative to make room for the papacy. The dictum that the winners write history was never truer than for Eusebius and his book.

Modern historiography has dismantled that narrative for compelling reasons. Postmodern suspicion of any and all grand narratives has discouraged the rise of a successor. No scholar of the last two generations has done more to ensure that Eusebius’s chair remains vacant than Elizabeth Clark, Professor Emerita of the John Carlisle Kilgo Professorship of Religion at Duke University. Her books, articles, teaching, and professional leadership have deepened and diversified our understanding of what we mean by “early Christianity” and how we should study it.
With the publication of The Fathers Refounded [1], she has now completed an impressive two-part reconstruction of how the scholarly study of post-biblical early Christianity first took root in the United States. The first part of this reconstruction, Founding the Fathers: Early Church History and Protestant Professors in Nineteenth-Century America [2], appeared in 2011. These books are not fly-over intellectual history but trench-work of a gratifyingly old-fashioned archival kind. Clark must have exalted to find such ample documentary material after a career studying late antique Christianity, whose extant literature is discouragingly limited and whose hermeneutical opacity she has done so much to render transparent, as in her 2004 book History, Theory, Text: Historians and the Linguistic Turn [3].